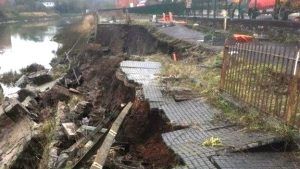 There is good news and bad news reported by the news media  about Chocolate Path which runs alongside Cumberland Road. The popular pedestrian path closed  in December 2017 when part of it collapsed into the New Cut. The additional collapse of a section of Cumberland Road in January 2020 made the future of the path even bleaker.

Bristol’s beloved Chocolate Path is to be repaired more than three years after it was shut due to serious subsidence.

Bristol’s cabinet has approved £2,491,190 to finish the Cumberland Road stabilisation project, with works to reduce the risk of future collapse and enable flood defences to be improved at a later date.

This repair work will enable the Chocolate Path and historic railway line running adjacent to it to reopen to the public by summer 2022.

Bristol City Council has identified that a footbridge on the Chocolate Path is among nearly a dozen structures in the city’s man-made waterways in “critical” need of repair or replacement in the next few years at a cost of around £14.35million.

The Chocolate Path bridge comprises a steel beam supporting the path where it crosses over the sluices from the Floating Harbour at Underfall Yard to the River Avon New Cut.