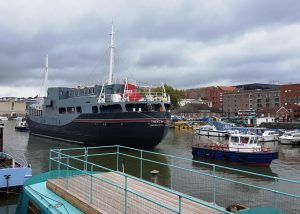 After a three-month re-fit with a £1m brand new hull, the Thekla has returned to her familiar mooring opposite the entrance to Bathurst Basin. Built in 1958, the ship marked its 35th anniversary as a music venue in Bristol at the beginning of May.

The major refurbishment was to the hull but the interior has also been spruced up. For Merchants Landing residents with appropriate musical tastes, the autumn schedule kicks off with folk-punk band Ferocious Dog on 15 September.