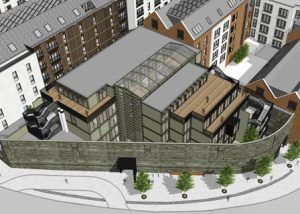 Architects Alec French are currently consulting the general public on their proposals for the old JS Fry Warehouse on the corner of Cumberland Road and Wapping Road. They had initially proposed accommodation for key workers in the city but the current proposal is for office accommodation only.

In a fashion similar to Cargos 1 and 2, the new scheme provides space in re-purposed shipping containers within the confines of the Grade II listed gaol walls, on the same footprint as the old warehouse. Unlike Cargos 1 and 2, the proposed development will extend over five floors around a central atrium which provides natural light at all levels.

According to B27/7, Stuart Hatton, director of Umberslade, the developers behind Wapping Wharf, said the idea came about in response to the deluge of requests for flexible work space in the area. 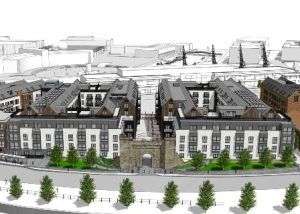 Development of the latest phase of the Wapping Wharf harbour (picture, left) is due to start in May after developers secured funding support from Homes England. Wapping Wharf Living, a joint venture between Umberslade and Muse, will see two residential blocks built, providing 256 one-, two- and three-bedroom homes.

Use the following link for more details of the proposals for the old JS Fry Warehouse. And this link to provide feedback to the developers.  Umberslade is planning to start works on the JS Fry Warehouse site in the autumn of 2018, and to open the space for office use in autumn 2019.