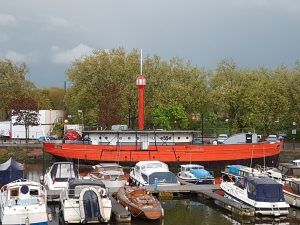 Lightship Theatre is, in the words of Briony Pope its organizer, an ‘extra name’ for the John Sebastian. But the theatre is more than a second name – it is a new fund-raising idea for the Cabot Cruising Club. The theatre is arranging a programme of plays, presentations, comedy nights, film showings, exhibitions, children’s theatre etc.

“From the early days of Morph, through Wallace and Gromit to Sean the Sheep, David will delight you with his first-hand narrative, photos and film clips. This fund-raising evening will warm your hearts as the Aardman story unfolds and takes you back over 40 years while supporting both David’s Grand Appeal charity and the John Sebastian Restoration Fund.”

The talk will start at 8pm and the bar will open for drinks (and ordering interval drinks) at 7:30. There will be an interval of about 20 minutes and a Q&A at the end of the presentation.

Tickets are £5 for Cruising Club members and £8 for non-members (children under 18 are free). They are available from Mike Pope, microving@gmail.com.

This group is based at the Bristol Old Vic Theatre. Any stage, screen or radio writer can bring along drafts of their work to be read at meetings where they receive feedback to help develop their ideas. This gives them the opportunity to be chosen for show-casing their work in front of an audience, in the form of a script-in-hand rehearsed reading (or Scratch Night), presented by a professional director and top class actors. It’s an opportunity for the audience to voice opinions about drama material destined for the entertainment industry and for writers to invite people along to see their work in action.

The Scratch Night will start at 8pm and the bar will open for drinks at 7:30.