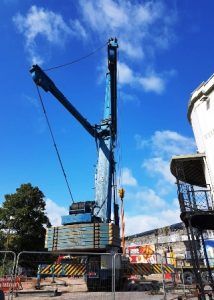 After a delayed start, the beams for the second Bathurst Bridge were put in position on Sunday 20th August. The crane from the Middlesbrough firm Sarens (photo right) is capable of lifting 500 tonnes, but the steels placed were only 35 tonnes apiece.  When delivered on Saturday the crane developed a faulty sensor and a technician drove down from Middlesbrough to fix it delaying the installation until Sunday.

Merchants Landing resident Mike Gaynor understood from the contractors that traffic should be on the new bridge by November.